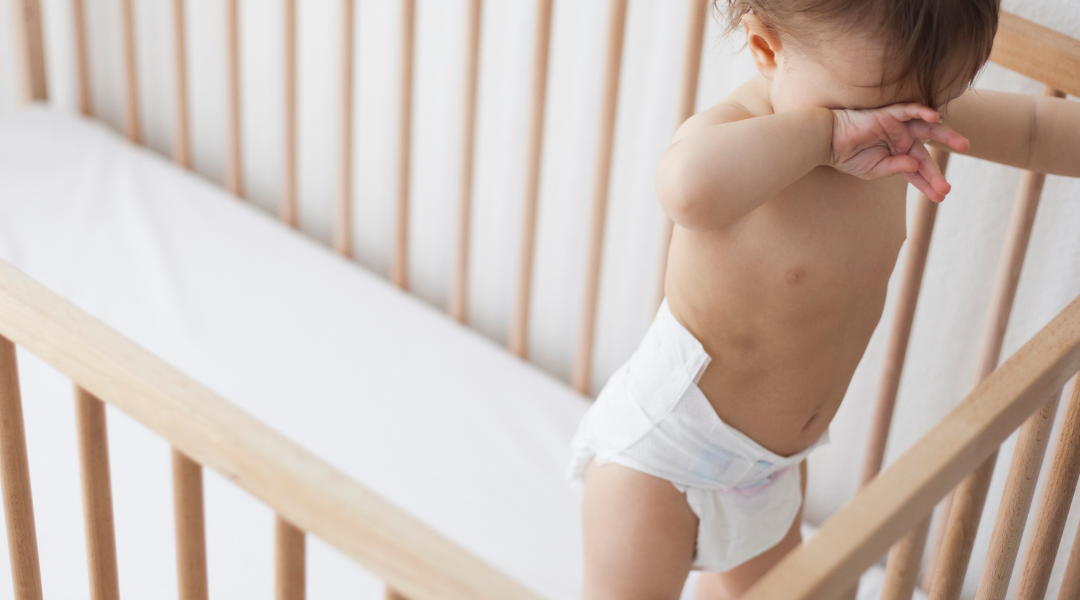 If you’re reading this, you’ve likely got a little one that’s been falling asleep in an awkward position. Or you’ve heard that it can be an issue and you’re looking to learn how to deal with it ahead of time.

So your baby has learned to stand up! Congratulations on this wonderful milestone! It’s such an exciting time to be a parent, and this is such a huge step into the world of development that’s coming your way very soon.

Having said that, a lot of babies run into a bit of an issue when they first learn to stand up; they haven’t learned to get back down yet.

During the day, this doesn’t present much of an issue. Your little one can spend all day practicing going from a standing position to seated, all while you’re next to them helping them through it.

But once nighttime rolls around, this becomes a whole other issue.

I know the Catch-22 this puts parents in, believe me. On the one hand, you can’t just leave your baby in a situation where they might fall down and hurt themselves, but on the other, if you keep going in and laying them down, they don’t learn how to do it themselves. What’s more, they’ll quickly learn that standing up and making a fuss is a pretty effective way to get mom or dad back into their room and paying attention to them.

So there’s a fine line that we need to walk in order to help baby figure out how to solve this little situation they find themselves in without creating a habit that could sabotage their sleep.

If your baby hasn’t started this behavior yet, let me warn you, it’s frustrating. More so than the average middle of the night wake-up, because the solution is so totally obvious. You’ll likely find yourself saying “Just lie down, already!” more than a few times before this gets resolved. I do want to reassure though,any developmental milestone and disruption to sleep should pass within a couple of weeks so hang in there!

As with all things in parenting, patience is essential here. Keep in mind that your baby may not know how to go from a standing position to a sitting one on their own yet, and they may not realize yet that sleep comes a whole lot easier when you lie down. Remind yourself of this when they wake you up for the fifth or sixth time in three hours because they’ve woken up and gotten back on their feet again, fussing because they can’t get back to sleep.

The quickest way through the first part of the equation is to develop that standing-to-sitting skill, so during the day, practice going from standing to sitting any chance you get. When baby pulls herself up to a standing position, try putting their favorite toy or stuffie on the ground nearby, gently encouraging them to go from a standing position back down to ground level in order to get their reward.  You can also pat the floor.

Once they’ve got that skill mastered, however, that second hurdle may still be an issue. They may not realize that sleep is a whole lot easier to achieve when they lie down.

It seems like it should be instinctive, I know, but a lot of things seem that way when you’ve been doing them all your life. When you’ve only been around for nine or ten months, it might not seem so intuitive, so again, patience mama!

We don’t want to create a situation where baby starts relying on you to do the work for her, so avoid repeatedly laying her down when she stands up in the crib. Do it a few times at first to show her what’s expected, but once that’s established, switch to a more suggestive approach that doesn’t involve contact. Pat the mattress and use a key phrase, like, “Lay your head down,” or “Come lie down, baby,” and before too long, they should start to connect the dots and realize that lying down is the best way to get to sleep.

Remember, even though it might appear that your little one is fighting sleep sometimes, that’s almost never the case. They want to sleep, but they just lack the skills necessary to get there on their own, so help them figure it out without doing the work for them and they’ll take care of the rest as soon as they develop a little confidence and ability. So practice, practice, practice!!

if you’re raising baby with a partner, talk this out with them and come up with a plan that both of you can agree on and follow through with. One parent responding with one set of expectations with another responding totally differently is going to confuse baby even further in a situation where they’ve already got a lot to figure out. Both of you will need to respond in the same way in order for your expectation to be clear, and you’ll see results a whole lot quicker if you’re working from the same playbook.

As always, be calm, be patient, and be consistent. The hard work now will pay off a thousand times over when your little one is sleeping soundly through the night and happily going down for naps during the day.